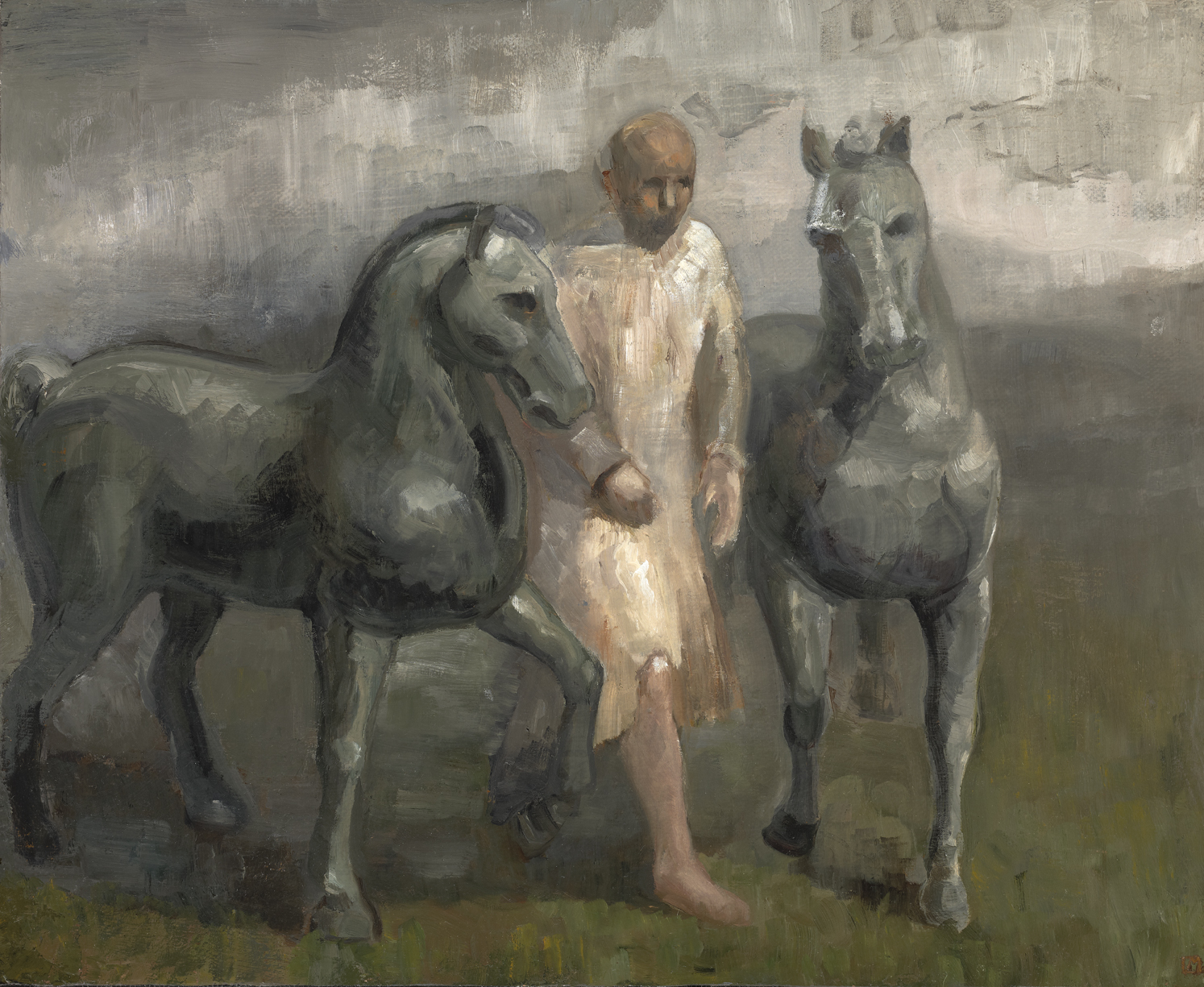 Realistic figurative painting had been on the outs with the mainstream art world since the church of modernism captured and made believers of just about everyone in the 20th century.  Beginning in the ‘post-modern era’ (a term hotly debated for describing the current state of contemporary art) a select few painters have taken up the traditional figurative painting style of the old masters and used it in a new way to describe the world around them.  David Molesky is one of these painters.  Having studied under Odd Nerdrum, the most famous of the contemporary painters working in the grand European tradition, Molesky has created a body of paintings that explore the psychological situations of humans in a highly technological age through the use of ambiguous, psychological narratives.

In this context, the paintings in ‘A Long Moment’ give us a full view of how Molesky is exploring and reacting to the world around him.  The most apparent aspects of this body of work are the complete rejection of the human made cityscape and the advanced technologies that make it function.  In its place, Molesky has located all of his figures in natural landscapes of his own making, which create a heavy psychological effect on both the figure and the viewer.  This reaction against the manmade world comes from the artists’ belief that humans are too disconnected from the natural world, causing them to move at a pace that does not allow them to experience the magic and mystery that Mother Nature creates every day.

Another important aspect of the work is the figures themselves, along with their ambiguous state in the landscapes.  Unlike traditional narrative paintings, where the story is clear and the meaning is readily determinable, there are no such clues as to why the figures are behaving as they do beyond themselves.  This removal of the figures from any recognizable story is drawn from how living in the advanced technological society of today continually puts individuals into states of ambiguity, isolation, and alienation on a daily basis.

The paintings of David Molesky are a clarion call to the seemingly deaf world around them to slow down and reconnect with the natural world.  They also remind us that the technologically advanced, manmade world that we surround ourselves with, while appearing to connect us more, is actually putting more distance between individuals and pulling us further away from the natural world.  They are both a reaction to, and a dream for, a culture that solipsistically removes itself from the things it needs most.

On the occasion of the opening of ‘A Journey Back,’ the first solo show of David Molesky’s work at the new SOMA gallery, 12 Gallagher Lane, I sat down with the artist to discuss the new body of work he is showing and the direction he is taking by revisiting the narrative thread in his work.

Greg Flood: How do you feel about your work being associated with the Kitsch label that is used to categorize certain artists?

David Molesky: I am okay with it because of my association with Odd Nerdrum. Nerdrum and his circle have made a great effort to change the connotation of the word to be a counter philosophy that supports work that does not fit within modern art theories. I get asked what I do all the time and I say that I am a painter. From that response people usually think that I am a house painter. I then have to say that I am an artist.

I don’t like to say that because I think that painter is a more honest word to use. To me the idea of an artist came with the idea of wanting to be trendy and fashionable. There is a lot of looking over the shoulder to see what other people are doing.

I had a strange moment in elementary school when my class was given a drawing assignment by the teacher. I got so absorbed in the drawing that I didn’t notice what other people were doing for a long time. When I finally stepped back to look at what I had done I looked up at the rest of the kids in the class and found they were all looking at each other’s work and were essentially making the same drawing. I was surprised and I must have had a strange look on my face because the teacher came over and told me that I was doing the assignment right, even though my work was vastly different.

GF: What is your source of inspiration for what you paint and what is going through your mind while you are painting it?

DM: I am working within a tradition of painting used to depict dramatic narratives. Historically these works have illustrated the Bible or Ovid’s Metamorphoses. Using a similar pictorial language, I chronicle specific escapades from my own adventures and stories in nature. I look especially to Rembrandt and Titian for solutions to the visual challenges in composing the scenes I want to paint. Rather than look to written stories passed down from oral traditions, I believe I am living in a grand story, and I see the experience of life as my source narrative. Within that I am exploring the interactions between humans, animals, and primeval nature, nature being a landscape, and the timelessness of human behavior and its unchanging nature.

GF: ‘Man with Two Horses,’ 2011 (oil on linen, 79 x 95 inches) is the largest painting you have in this show and the natural focal point. In it we can see a man leading a pair of wild horses across a grassy plain at night. What part of your life inspired you to paint this?

DM: When I was painting this I was reflecting on the experience of the metaphysical space of that moment. From that I illustrated the narrative space and the figures within that space. The part of my life that was the source for inspiration is from when I was taking a walk through an open field on a ranch in Colorado with my didgeridoo. On the far side of the field from where I was walking were these two horses. I decided to play the didgeridoo for them and when I did they looked up and ran over to walk with me. It was a magical moment where they were walking with me in love with the sound.

During the time I was apprenticed under Odd Nerdrum, he invited me to live at his house in Reykjavik, Iceland during the winter. It was a spooky place because there was no sunlight for a long time and he left me there by myself. That period in my life is another point I was exploring in ‘Man with Two Horses’ and some of the others in this show. The last thing that Odd said to me before he left me in the darkness there was that I needed ‘to go into a dark cave and look for a small dark flame.’ He was telling me that I could not count on the outside world for inspiration for my work and that I would have to look deep inside my mind and find it for myself.

GF: Could you talk a little bit more about the primeval and mystical aspects of your life and how they have become the source of inspiration for your work?

DM: I personally have amazing interactions with animals. For some reason I do not seem to disturb them when I come upon them out in nature. They get this confused look in their eyes because they are not sure what I am. Since I was a small child I have greatly enjoyed mimicking animals. I like to go out and become lost in nature for hours at a time. I get hypnotized by the sounds of wind in the trees and in communing with the animals.

I generally feel estranged from the modern pace of human life and interest. The human world is strange to me, and yet I am a part of it. I see humans as being disconnected from nature and alienated from it in many ways. I am very interested in the Wandervogel youth movement from the early 20th century and the works of Hermann Hesse.

GF: There are a number of portraits and self portraits in the show. The largest of the self-portraits is called ‘Painting in the Dark,’ 2011 (oil on linen, 41 x 36 inches) and it shows you in a pose that is not very common for a portrait.

DM: This is actually a second version of a portrait I did of the same name back when I was staying in Iceland. (The original version can be seen on David Molesky’s blog by clicking here.) In the foyer of his house there was an old tarnished mirror that I used in order to pose for the image. On the surrounding walls of the room were Edvard Munch’s etching ‘The Sick Girl’ and his death mask and Kathe Kollwitz’s print ‘Woman with a dead child’, which looks more like a demon eating a woman. So, the room was very spooky besides the mirror being in there. I painted the original image as if the act of painting was helping me to conquer the never-ending darkness of Icelandic winter.

This new version is basically the same but it has Scorpio painted among the stars and it has the northern lights in it. It also differs in that in this painting I am looking out to the viewer and with the addition of this quality, I realized it is similar to self-portraits by Rembrandt and Titian. (To see the respective paintings that inspired David, click here and here.) I have a brush in my hand and I added sensuality by changing the pose slightly and being shown undressed. This allowed me to join the line of these painter’s portraits while making it my own.

GF: Looking at one of your more complex and psychological works called ‘Swimmers,’ 2011 (oil on linen, 32 x 42 inches) are we seeing you revisit a relationship you had with a woman in your life?

DM: The answer is yes and no. It is more of a contemplation on relationships and the difficult moments where it is difficult for a man to connect to a woman. The location and inspiration of this scene comes from a heated pool of water I would visit with another artist I was living with while I was staying in Iceland. We would become very affected by the endless hours of darkness and our interactions would become stressed. We would visit this heated water pool to relax and reconnect with each other. So, the painting is about reconnection on a certain level, but at the moment we see they are still separated and he is in a moment of contemplation.

GF: What will be your next step and what does the future hold?

DM: I am going to continue work with the narrative path I have been revisiting lately. I will definitely keep up the four color palette in my work. I am definitely interested in working with the inspirations around me like the studio, the people around me, and the landscape. I am not very interested in urban settings for my work, even though I live in one, but I also want to bring people and nature back together here, where it is accessible in the city. I would really like for the busyness of the world to slow down so people can find the beautiful, mystic moments when they present themselves. 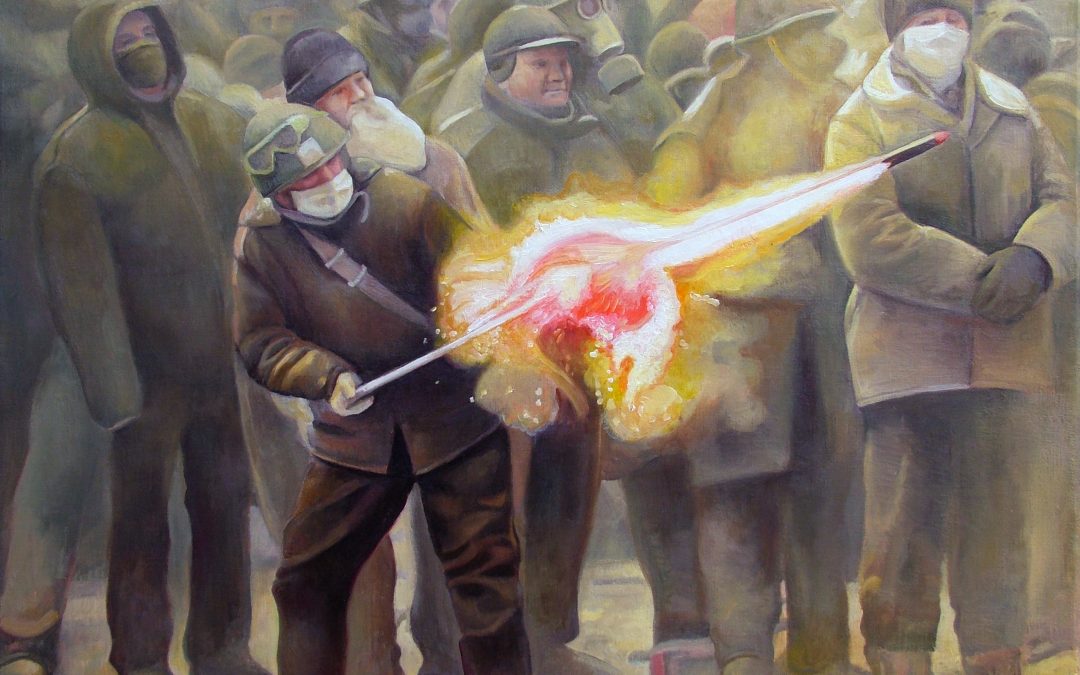