The Land of Fire & Ice: David Molesky travels to Iceland. 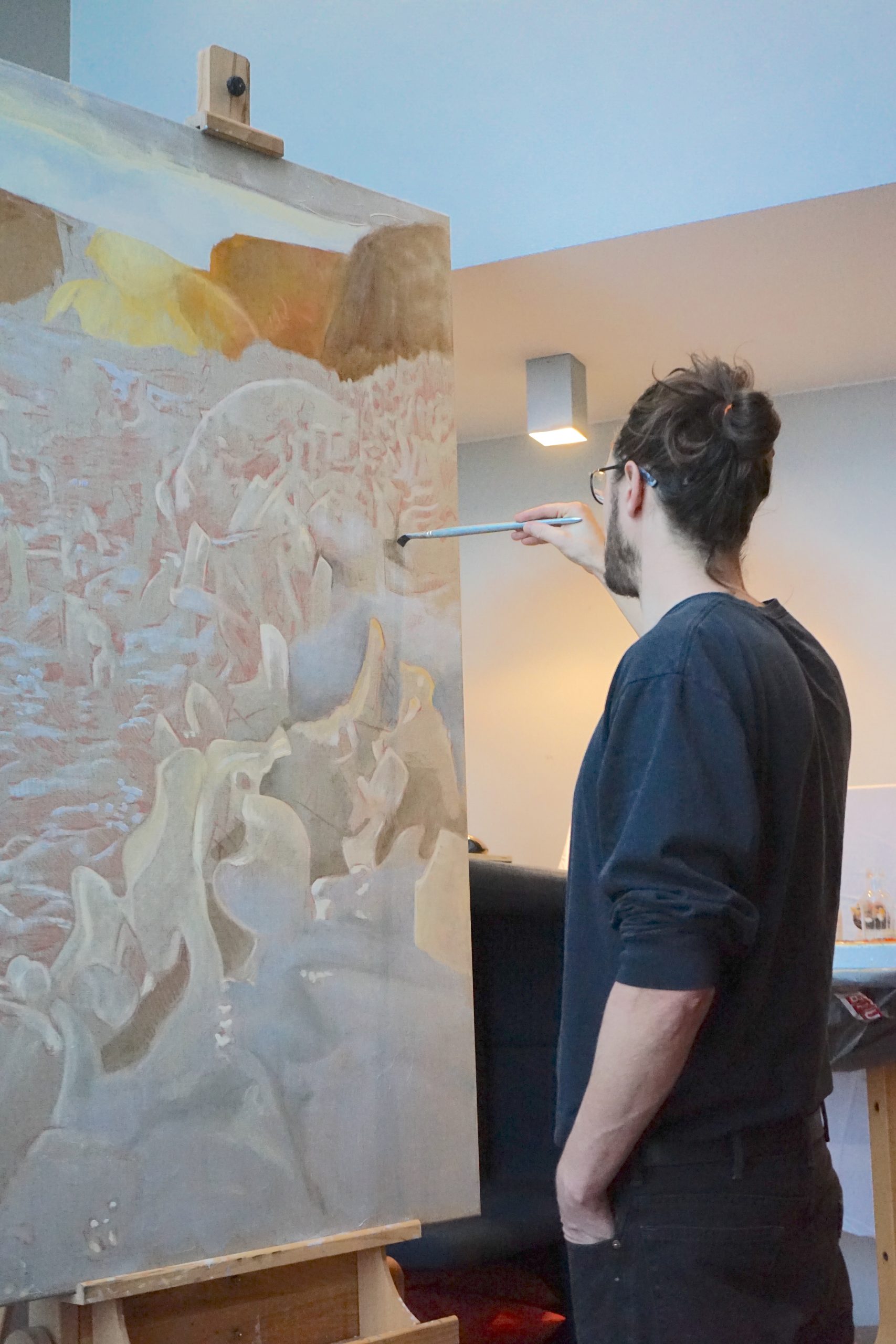 In the back courtyard of my favorite cafe in San Francisco, I heard a familiar intonation and, curious, asked if they were speaking Icelandic. “What, do you recognize my accent from a Sigur Rós video?” challenged one of the men, who was mildly surprised when I replied,  “No, I lived there.” Intrigued, the Icelanders prodded me into sharing the story of living in Reykjavík’s former city library when it was owned by the painter Odd Nerdrum and how conversation evolved into a studio visit and a sale—making me the only non-Icelandic artist in the young businessman’s growing art collection.

Years later, during the autumn of 2019, the collector and his wife visited me in Brooklyn and purchased another painting, Unfinished Breakfast. They also asked to put a large painting on hold for purchase the next year. Even as the world entered lockdown, they kept their word. The plan was for me to transport the oversized, rolled-up canvas on the plane and then come to paint in their summer cabin, comfortably nestled within the mythical landscape of Iceland.

One slight hurdle: due to the pandemic, US passport holders were not permitted into Nordic and EU countries. Luckily, a good friend had a contact working at the Icelandic Ministry of Foreign Affairs who took my case, and after a few months of processing, I was issued a letter permitting a narrow window of time to enter the country. Boston was the only airport offering service to Iceland, so in the company of a sparse, few fellow travelers, I passed through an empty TSA checkpoint, and then after a requisite 5 1/2 hours of direct-to-video movies, stumbled into Keflavik airport, ushered into a cubicle and assaulted with a cotton swab shoved up my nose. Welcome to Iceland.

After two hours of traversing ice and snow with the hum and crackle of spiked tires and gusts of wind that jolted the vehicle sideways, my driver delivered me, in the shadow of darkness, to the cabin. It was 9:30 am. A faint ink color swathed the sky where the sun would emerge two hours later. In the winter months, our star only makes a low arch above the horizon before dropping back down again, a bit clockwise from where it rose. This scarcity of light can deflate you like a wilted flower, so a gulp of Vitamin D supplements helps tremendously, as well as a diet of fatty fish which Iceland supplies in abundance.

A silver lining to this pervasive dimmer switch are day-long sunrise/sunsets. If they can make their way through the variable atmospheres, the rays shift prismatically to every color of the rainbow. On rare occasions you can witness other strange phenomena such as sundogs, ice halos, polar stratospheric clouds, and on clear nights, the aurora borealis.

The geothermally heated public pools and rustic “hot pots” scattered through the landscape make it possible to enjoy some sun outdoors even when it’s literally freezing. Just a stone’s throw away from the cabin are some great options. The town of Flúðir is home to the Secret Lagoon, a natural hot tub the size of a pond. In the tiny village adjacent is Hrunalaug, a primitive hot spring tucked into the hillside at the end of a short hiking trail. Year round greenhouses also harness these geothermal vents. At Friðheimar in Reykholt, the largest producer of tomatoes in Iceland, you can bask in the warm humidity of the restaurant inside the greenhouse while enjoying their world famous tomato soup.

To the North, along the road that leads into the highlands, are two famous natural wonders, Geysir (the etymological source of the word geyser) and Gullfoss (golden falls) which is basically the Niagara of Iceland. Proceed west in the direction of Reykjavík to discover Þingvellir National Park, which boasts a huge lake and a canyon that physically manifests the North American and European tectonic plates moving away from each other. This area is also the founding site of the oldest operating parliament in the world—the Alþingi, which relocated to Reykjavík (smokey bay) in 1843.

In the Middle Ages, independent seafaring people from Western Norway had a summer tradition of sending their young men out across the sea—usually to Ireland and Scotland—with the goal of bringing back treasures and wives (in no particular order?) You want vikings, you get vikings. In the mid-800s, a warlord named Harold, in attempting to unify the Norse clans under his control, demanded that everyone pay tribute taxes to him. Most of the vikings rejected Harold and battled him without success. In 874 AD, they began a 600 mile retreat due west, along with their livestock, sailing and rowing boats across the Atlantic Ocean to settle the shores of Iceland. The challenges and conflicts of their migration were passed down through generations of oral tradition and dutifully written in runic characters in the 13th century. (For a cinematic view of viking life, check out the cult classic When the Raven Flies.)

To ensure the right people came to Iceland (the nice land), someone had the clever idea to name the land covered with ice Greenland and the land with green forests and pasture Iceland. For those who came to Iceland, the law stated that you could claim as much land as you could walk the perimeter of in one day—not always easy in the lumpy moss-covered lava fields. Amazingly, the settlement of Iceland did not involve the displacement of any native peoples, only the foxes and mice who, it is assumed, drifted over on ice. Apparently at that time, the land was covered in forest, but little did the settlers know that these trees were old growth. They looked just like young trees in Norway because the severe weather and wind stunted their growth. Eventually, the newcomers used all of the trees as firewood, and without shelter and root structures, powerful winds blasting off glaciers blew the topsoil into the ocean, making farming even more impossible. Things got grim and then even worse as the ash from volcanic eruptions caused a mini ice age. Huddling together into smaller crevices in their mud huts, they resorted to burning manure from livestock. To prevent starvation, nothing was wasted. Every part of the sheep was eaten and there was never a by-catch, thus the taste for debatably appetizing traditional delicacies such as skata or hákarl, the infamous rotting piss shark.

Reaching a ripe old age was nearly impossible. Life itself required a determined blind optimism. If you didn’t have that, your chances of survival were basically zero. This very attitude, established by experiences of the early settlers, is fundamental to the Icelandic mentality. Their national motto “Þetta reddast”  translates to “it will work out.” Landlocked and living in poor conditions, the scattered settlements were vulnerable. A few centuries after the settlement, Iceland was first colonized by Norway and ultimately ended up under Danish rule through blue blood marriages in Scandinavia at the time. The Danes were harsh and confiscated many of Iceland’s most valuable possessions, including its self-esteem and confidence.

From Third World to First World

In May of 1940, Allied Forces led by the British temporarily occupied Iceland, forestalling the Nazis who had recently conquered Denmark and Norway. Although not welcomed at first, it turned out to be a godsend for Iceland, previously one of the poorest countries in Europe. It wasn’t uncommon for people born in the ’30s to be raised in the same kind of mud huts dating to centuries prior. In 1944, Iceland declared independence and took ownership of the airports that had been used as refueling stations for aircraft coming over from America.

Although Icelandic engineers were aware of the potential for geothermal energy, its use didn’t become widespread until the oil crisis of the 1970’s. Just a minimal amount of drilling untapped an unlimited source of volcanic-level heat, giving Iceland full energy independence. Now, homes are heated and electricity is generated for peanuts, with enough energy left over to outsource energy-intensive industrial projects like aluminium smelting.

When I returned to Iceland for the first time in 11 years, I was surprised by the mass of foreigners. Tourism had just become the top industry, surpassing the position held by fisheries for a millenium. With a citizenry of only 350,000, half of whom live in Reykjavík, Iceland became flooded with 2.3 million tourists that year. Now, with borders closed to the US and very little travel coming from Europe, it’s been a pleasure to return to the natural attractions that are blissfully less crowded than in decades.

I’ve enjoyed spending my pandemic winter in Iceland, the only country outside of the US where I have felt truly at home. With my three month tourist Schengen visa soon to expire, I’m making plans to stay longer: I applied for an extended visa, and have been accepted to the Akureyri Art Museum residency on the north coast. And so I begin the next chapter of my personal Icelandic Saga. I’ve heard springtime on the arctic circle is magical. – David Molesky